Q&A: Part 1, Part 2, Part 3, Part 4
Mark Foster Gage is a tenured professor and and Assistant Dean at the Yale School of Architecture. Gage engages in experimental and daring “architecture” that has been widely recognized. The body of Gage’s work lies somewhere at the intersection of digital technology, materials innovation, and robotic construction, pushing boundaries at all scales. His New York City firm expands the concept of architecture to be practically all-inclusive. In addition to its commercial and residential projects, Mark Foster Gage Architects produces work in many fields including product design and exhibitions. Gage’s portfolio also includes the design for a dress for Lady Gaga.
At Yale, Gage teaches a course titled “Disheveled Geometries” in which students explore recombining existing 3-dimensional forms in unexpected ways in order to question “slippages of perception between forms and figures, and figures and content.” Gage is recognized around the world, having exhibited his work internationally at institutions like the Museum of Modern Art. Beyond recognition in architectural and academic publications such as the Journal of Architectural Education and Perspecta, Gage’s work has been featured in Newsweek and on MTV and PBS.

SNARKITECTURE emerged from the collaboration of two classmates at Cooper Union, Daniel Arsham (’03) and Alex Mustonen (’05).  A few years after graduation they capitalized on their collection of talents, passions and imaginations to form Snarkitecture, an interdisciplinary firm that seeks to transcend perceived boundaries of art and architecture. Within their breadth of work it is apparent that they approach each project, big or small, with a single goal of bringing together a variety of techniques in an equally familiar and unfamiliar way.  Daniel and Alex do not limit themselves to one media or project type. Their collaboration sets them apart from traditional sculptors, graphic designers, interior designers, installation artists and architects but also celebrates these fields in all of their work.

Lebanese architect Bernard Khoury describes himself as an architect of the present. Juxtapositions in his work, such as bullet holes and a good steak, do not serve as sensationalism in his work, but as clarity–a lack of denial about the potentially troubling realities of the modern world.  His earlier work, famous for showcasing scars from Lebanon’s civil war, and his more contemporary residential development projects in Beirut, share motifs: moving structures, black onyx-like materials contrasted with warm wood tones, portions of curves, entrances reminiscent of tombs, masses like pyramids to be climbed. The names of these projects belie their complexity and synchronization—Plot 183, plot 7950 and so forth.  His work is interesting: aesthetically impressive and challenging in the same moment.
Invested in situations, Khoury and his studio solve problems in the immediate, and what many would brand as political, is seemingly anything but for Khoury.  He sees each new commission as a chance to create a new work, a place to live, and something that is both distinct to Beirut and at the same time an alien in its own environment. 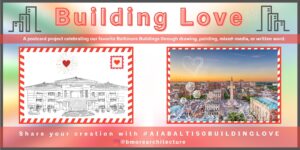 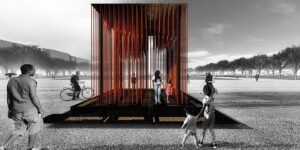 Society’s Cage: The Shape of Institutional Racism Has Arrived In Baltimore!