The most conspicuous memorial in Baltimore of the labors of E. G. Lind is the Peabody Institute. He was its architect. Only a few other surviving structures in the city have been singled out as evidence of his prolific work here and in other parts of the world during an active career of some 40 years. 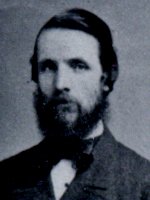 Edmund George Lind was born in Islington, England, a town now a part of London, on June 18, 1829. His father, Alexander Lind, was an engraver of Swedish descent. During the Revolutionary War the senior Lind, then a colonel of dragoons, fought on the British side at the Battle of Bunker Hill. Edmund’s mother came from an old English family.

When Edmund was still young the family moved to Birmingham, England, and there he received the rudiments of an ordinary school education. Drawing and painting became his favorite pastimes. Arrived at maturity, he made a try at law but dropped it to study architecture at the London School of Design. For several years after his graduation he worked in architects’ offices in London.

In 1855, Lind arrived in New York where he at once found employment as chief draftsman for Norris G. Starkweather, an architect of that city, who had just designed the First Presbyterian Church in Baltimore (which stands at Madison Street and Park Avenue). Lind is credited with its construction between 1854 and 1859. The lofty and finely proportioned spire, which is such a charming local landmark, was not erected until 1874. Then, Lind carried the work out on Starkweather’s original design. [Note: Lind’s daughter, Margaret Murdoch Lind Laird, contended in a letter to the Baltimore Sun published November 24, 1954, that her father was entirely responsible for the design of the spire, Starkweather having designed only the church itself].

Lind left the office of Starkweather in 1856 to enter into a partnership with William T. Murdoch, with whom he was associated until around 1860. He married his partner’s first cousin, Margaret Murdoch, daughter of William F. Murdoch. It was during the Murdoch partnership that the firm’s design was chosen by the Peabody trustees from among a number of plans and specifications offered by architects of Baltimore and other cities.

The west wing of the building was begun in 1858. It contained the Peabody Hall, rooms of the conservatory and a picture gallery. This unity was completed in 1861 and publicly dedicated in the presence of George Peabody, the founder, on October 25, 1866. In 1875 ,the east wing was begun. It was finished under Lind’s supervision in 1878. Its most impressive feature is its large central reading room, rising to the full height of the building under a skylight and flanked by alcoves six stories high providing space for 300,000 volumes.

This was the age of cast-iron construction and Baltimore was the center of cast-iron manufacture. The alcoves and balconies are built of this material. The one tier of pilasters, the two tiers of pillars above them and the rest of the elaborate classical ornamentation are Lind’s design. They were executed by the Bartlett, Robbins & [Company], specialists in cast-iron work and predecessors of the present Bartlett Hayward division of the Koppers Company.

This hall has been described as “the setting of a bibliophile’s dream, architecturally one of the most interesting interiors in the city of Baltimore.” Another distinguished example of Lind’s work is Memorial Protestant Episcopal Church, at Bolton Street and Lafayette Avenue. Still standing, but rather less distinguished, is the church at the southwest corner of Dolphin and Etting streets, which originally served as a mission of the First Presbyterian. Another local survival is the monument to Capt. John Gleason, of the 5th Maryland Infantry, in Cathedral Cemetery.

Lind’s active professional career extended from 1856 to 1892. During those years he kept a record book in which he noted every item of work-original design, remodeling, and repair-executed by him and the cost of each. The record covers almost every variety of construction, including country estates, city residences, churches, hotels, Masonic lodges, stores and warehouses. There are 26 entries whose cost is listed at $50,000 or more.

The entries reveal not only his activity in Baltimore city and Baltimore county and in the state at large, but also in Pennsylvania, the District of Columbia, Illinois, Delaware, Virginia, North Carolina, Georgia and Tennessee. His fame even extended to South America where he designed a $200,000 market house and city hall combined for Guayaquil, Ecuador.

Lind’s interests were not confined to architecture. He became absorbed in the theory of the relationship between music and color. In 1894 he wrote an essay on the subject. He also transposed “Yankee Doodle,” “The Star-Spangled Banner” and a number of other popular songs from music into color. His essay and a volume of his transcriptions are now in the possession of the Peabody Library.

The seven colors of the solar spectrum and the seven sounds of the diatonic scale, as well as many historic references to the number seven, led him to attach special significance to that number. He reports that, having had trouble with acoustics in some of his structures, he tried the experiment of building a church in Georgia, all of whose dimensions were in multiples of seven. The acoustics turned out to be excellent. Aware that the acoustics of the First Presbyterian Church in Baltimore were unusually good, he reports measuring the central auditorium and finding that its dimensions also approximated multiples of seven.

Lind’s record book (i. e., his journal) extends no further than 1892. [His project list documents work through 1902.] He, however, did not die until 1909, at the age of 80 years. Thanks to the record book, the original of which is at the Maryland Historical Society, we have a more detailed account of Lind’s career than that of any of his contemporary architects. A painstaking search no doubt would reveal in the city and the neighboring counties more of his surviving work than is here mentioned.

The project list of Edmund G. Lind, in manuscript at the Maryland Historical Society, offers uncommon insights into the practice of one of Baltimore’s most significant architects of the late 19th century. Lind was a meticulous record keeper, and his job list includes the date, building type, owner’s name, location, and cost for over 900 projects spanning the years 1856-1902. A wide variety of projects is included, ranging from patent drawings, tombstones, and bird boxes, through residential and commercial buildings and alterations, to the Peabody Library and an entry in the competition for the Library of Congress. The architect’s peregrinations are also clearly reflected, as an increasing number of projects outside the Baltimore area in the late 1870s was followed by a ten-year sojourn in Georgia between 1883-1893.

By Francis F. Beirne and published in the Baltimore Sun, November 8, 1954.