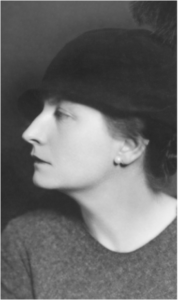 “You cannot maintain your career in an ivory tower and expect to succeed. You must get out there and work with the others.”
St. Anthony Messenger,  April 1944

Hildreth Meière was not an architect, but a talented artist who imbued the architecture she touched with astonishing beauty. A year abroad following high school was her inspiration:

“We went to Italy, and the glories of the Renaissance opened before my hungry eyes, and I fell in love, once and for all, with mural painting and great beautiful walls.”

Architect Bertram Grosvenor Goodhue gave Meière her first two major commissions: the Great Hall of his National Academy of Sciences in Washington DC and the interior of his Nebraska State Capitol in Lincoln. Although she worked with him for only a short time before his death in 1924, his eclectic style and collaborative approach to design had a lasting influence on her. Meière saw her role as embellishing a building with designs that were integral to the architecture, conveying the building’s purpose.

In 1929, Meière received her first corporate commission: the banking hall floor of the Baltimore Trust Company Building for Taylor & Fisher Architects. Her marble floor panels alluded to the city’s major industries and maritime activities. The Baltimore Sun wrote in 1930 “As to Miss Meiere, there is… no artist in America who has a more highly developed sense of the possibility of her mediums… Her work on the new Baltimore Trust Building is the most recent example of her courageous pioneering in handling floors…not merely as a space to be filled with unrelated geometric designs, but as an integral part of the decorative scheme of an architectural creation.“

Also with Taylor & Fisher, Meière designed and painted the main altarpiece at St. Mark’s on the Hill in Pikesville in 1933. That same year, she completed her only other project in Baltimore, this time with Henry Dagit & Sons. She developed glass mosaics for three high relief altarpieces and the Stations of the Cross in the Church of St. Katharine of Sienna. The only commissions in the area that followed were in 1941 for the Municipal Center and in 1951 for the Washington National Cathedral, both in Washington DC.

Meière embellished over 60 buildings across the states, only a few of which are highlighted in her timeline. She worked collaboratively with architect and client on the concepts and then with craftsmen who helped realize them. Known for her versatility and willingness to experiment with new materials, Meière painted and designed for a variety of mediums, including glass mosaic, glazed terracotta, stained glass, and metal relief sculpture.

In 1956 she received the Fine Arts Medal of the American Institute of Architects. The citation described Hildreth Meière as a master of murals, but she was so much more. She was critical member of the architecture team who enlivened the built environment with stunning beauty and grace.

“Christ and His Mother” Altarpiece in St. Mark’s on the Hill, Pikesville MD (1933)
Hildreth Meière Dunn

1916 – Returns to New York City to work with costume and set designer Livingston Platt; Designs theatrical costumes for production at the Metropolitan Opera

1918-19 – Studies mechanical drawing and surveying at Columbia University; Joins U.S. Navy; Trains as a mapmaker; Serves as an architectural draftsman

1919-23 – Studies mural painting at School of Applied Design for Women with Ernest Peixotto; Participates in competitions at Beaux-Arts Institute of Design

1921-22 – Studies at Art Institute of Chicago School of Art; Travels to Annapolis to study colonial interiors for competition entry

1961 – Passes away on May 2 at age 69 working on the last of 9 commissions for the Cathedral Basilica of Saint Louis, St. Louis, MO