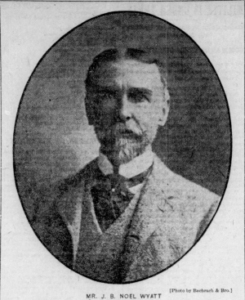 On his mother’s side, he was descended from the Noel and Nicholson families, who were influential in Queen Anne’s County. His father was a civil engineer who was seriously disabled on the job the year that James was born. Until he was 17, he lived at Summer Hill, a suburban family estate northwest of Baltimore (which was adjacent to both Mondawmin and Auchentoroly). He was educated at home by tutors until age 13, and then attended the Rugby Academy at Hamilton Terrace.

In 1865, Wyatt and his parents moved to Cambridge, Massachusetts. He was tutored for a year before entering Harvard College, graduating in 1870. In the fall of 1870 he entered the architectural department of the five year old Massachusetts Institute of Technology (MIT). By 1871 he had moved to Paris and entered the Atelier Vaudremer of the Ecole des Beaux Arts (the same Atelier in which Louis Sullivan had studied) where he studied for three years.

Wyatt returned to Baltimore in the fall of 1874. He worked for a brief time in the office of E. Francis Baldwin, where he probably first met his future partner, Joseph Evans Sperry. It was Sperry who prepared the drawing of the Safe Deposit and Trust Company Building (1875) featured in the January 15, 1876 issue of the American Architect and Building News during its first month of publication.

Enjoying independent means, strong social and professional connections, and the best formal architectural education available, Wyatt was well prepared to begin practice on his own. He was elected a member of the Baltimore Chapter of the AIA in 1875, and Treasurer in 1876. That year he opened his own office at the southwest corner of Charles and Lexington Streets. He designed and oversaw construction of a new house for himself and his mother at the northwest corner of Maryland and North Avenues.

In 1876, his design for the house and an earlier student design for a chapel were published in the American Architect and Building News. In October 1876, Wyatt became a vestryman of the newly established Saint Michael and All Angels Church.

By March of 1877, Wyatt had entered partnership with Sperry, a professional association that would last into 1887. It is difficult to determine the role of each partner during the period, but it can be assumed from their project list that Wyatt’s Episcopal Church and Harvard connections helped the firm get work in its early years. The most significant projects produced by the team were St. Michael and All Angels Church (1877-1890), Belvedere Terrace (1881-1882), and the Mercantile Safe Deposit and Trust Company Building (1885). Of all his projects, it is the last of which Wyatt remained “most proud” throughout his career, and which received the most national and some international notice.

By the fall of 1889, Wyatt had joined with William G. Nolting to form a partnership that would last until Wyatt’s death in 1926. The firm was both prolific and versatile through the decades. The most significant accomplishments of the firm during Wyatt’s lifetime included the Baltimore City Courthouse (1894-1901), dozens of structures for the Roland Park Company, as well as for individual clients and the partners’ own homes in Roland Park (1894-19 ), and the Keyser Building (1904-1905).

Wyatt devoted considerable energy to a wide variety of professional, cultural, educational and social welfare activities. He was a founder of the University Club and the Baltimore Architectural Club. He served as president or officer of the Baltimore Chapter of the AIA, the Municipal Art Society, the Baltimore Association for the Improvement of the Condition of the Poor, the Baltimore Fine Arts Commission, the Citizens Emergency Committee on the Burnt District, the Harvard Club of Maryland, the Society of Beaux Arts Architects, and served on a committee with Walter Cook and Frederick Law Olmstead to plan the Homewood campus of Johns Hopkins University. He was a Fellow of the AIA. He was a member of the Maryland Historical Society and the Society of Mayflower Descendants. He was a frequent lecturer on architecture and architectural history at Hopkins, Goucher and elsewhere in Baltimore, and provided an endowment to bring William R. Ware, Henry Van Brunt and Howard Walker to lecture at Hopkins in 1895.

In addition to being the occasional Baltimore correspondent to the American Architect and Building News, his architectural writings were published in the Architectural Review and Art and Archaeology. His writings and his letters to Mrs. Charles J. Bowen (in the Manuscript Collection of the Maryland Historical Society) may provide the most informed and complete contemporary critical review of the architecture of Baltimore of the last quarter of the nineteenth century. His writings demonstrate that he may have been the most knowledgeable architect of the period on the history of architecture in Maryland.

Health issues led to Wyatt losing his sight in one eye and his hearing in one ear. By 1907, by which time Wyatt was 60, he would say that his position in the firm was one “being largely of consultation and advice.” It was after his death, in 1933, that the firm would produce its most thoroughly modern building with the Patterson Park High School. But there were frequent examples of modern planning and aesthetic principles in the firm’s earlier work.