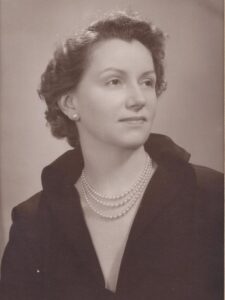 “You have the distinction of being the only lady architect in the Society and it must be left to your discretion whether you would wish to be the only lady in the entire gathering of men.”
From correspondence of Lucien Gaudreau, President of the Maryland Society of Registered Architects, 1938

1n 1936, Katherine Cutler Ficken became the first woman to earn an architecture license in Maryland, the first year the state offered such a license. She  received her architecture degree from George Washington University (GWU) and spent several years working part-time and in the summers in her father’s firm of Howard W. Cutler, Architects in Washington DC. Clients, such as the Montgomery County Public Schools (MCPS) and the University of Maryland (UMD) kept the firm afloat during the depression.

In 1935, the Washington Post article “Dad Displeased Once, Proud of Girl Now” indicted that her time was almost exclusively devoted to MCPS’s construction program. She helped design both Chevy Chase and Lynbrook Elementary Schools as well as Bethesda-Chevy Chase High. She also assisted her father with the Rock Creek Field House in Meadowbrook Park, a rustic lodge constructed by the Civilian Conservation Corps in 1940. She continued to produce work jointly with him as an Associate, well after establishing her own firm in 1934.

Her obituary credited the American Instrument Co. on Georgia Avenue in Silver Spring to her. If she was responsible for all the structures on the block, it would be one of her first projects, completed at the age of 24. By 1938, she designed UM’s Edna Amos Nice Hall in Solomons Island, which bears her name on its plaque.

That she was young, single and the only woman member of the Maryland Society of Registered Architects challenged society’s norms. When wishing to attend the annual dinner meeting in 1938, she was advised to consult the judgement of her “good father” on being the only woman in an entire gathering of men.

The 1940 commission to design the estate for Clara Hyatt, a wealthy eccentric widow, must have been a breath of fresh air for Ficken. She designed everything, including the manor house, dairy barn, farm structures, and even a watering system for the fields. Masterful at integrating functionality into design, she planned the farm as a production line that a sole woman could run during the war. The fairytale residence miraculously survives today in the middle of a large housing development near Germantown. With its fanciful architecture and lack of white on its exterior brick, the owners dubbed it Redwall, after the red-stone abbey of the popular children’s book.

Ficken was equally proud of her Ceres Restaurant “reconstruction” in Washington DC, which received Best Planned & Designed Restaurant over a 5-year period by Institutions Magazine in 1950. From its efficiently arranged, stainless steal kitchen, to its stone and brick exterior cladding, it was more modern then anything she had done before. Its success helped her to secure the commission for UMD’s large Dining Hall Addition, part of a Post-War Public Works Program of 1945.

When she was 36, she married Rudolph Ficken and she changed her practice to “Katherine Cutler Ficken, Architect.” A year later, her father died at 65 after a long illness. At the age of 45, she and her husband adopted a 4 month old son, but less than 12 years later, cancer took her life. We are fortunate she assembled, and passed onto her son, a large photo album of her own projects and publicity coverage so we may know the scale and breath of her design talents.

1917-20 – During World War I, father serves as a Major for the Surgeon General’s staff, in charge of designing U.S. military hospitals, including an addition to Walter Reed Hospital, Washington, DC

1935 – The Washington Post features her in July 22 article Dad Displeased Once, Proud of Girl Now

1966 – Cancer no longer in remission; At some point prior to death, puts together portfolio album of her projects and newspaper clippings